Finally, before I forget about it, here’s a few more photos from our wondrous, kid-free getaway in Sound of Music country.

The shopping is just way, way better in Salzburg than in Vienna. It generally isn’t to my taste–think a European version of a Cracker Barrel country store–but at least it’s not made in China, like it is in Vienna. Well, most of it isn’t.

One very odd feature of many gift shops are mannequins dressed up as various Salzburgian characters.

Another Salzburg “thing” is trachten or traditional Austrian clothing. These outfits are actually worn on dressy occasions in Vienna, and I even saw a few women wearing dirndls on an everyday basis in Salzburg. You can find relatively inexpensive outfits at department stores in Vienna, but Salzburg, nothing less than the best will do.

Finally, we wrapped up the day with the most expensive meal I have ever eaten. Of course, we ate in a beer hall the night before, and had breakfast at McDonald’s, so it kind of averaged out. Still, if I told you what this meal cost, you simply wouldn’t believe it. It was really good, anyway. Clearly, a photo for the scrapbook was required. 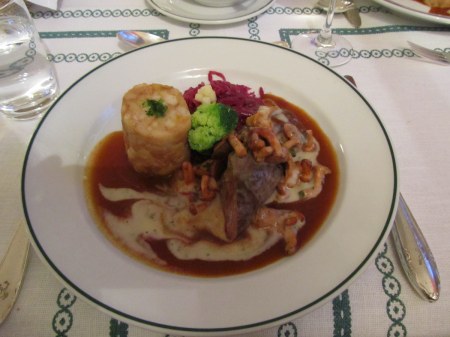