My husband was in charge of the Fourth of July festivities for the American Embassy here in Prague. Forget fireworks and hot dogs though: this was the Stuffy Fourth, an annual cocktail party of mammoth proportions to which nearly all Americans, and others who “matter,” in a given country expect to be invited. As this year’s official sacrificial diplomat, he survived largely through anticipation of a getaway immediately following. So, we employed our most excellent Czech babysitter for three days and boarded a train for the four and 1/2 hour trip to Vienna.

Just think, a mere 12 years ago, this train trip would have been between the eastern and western blocs–between worlds, as a matter of fact. Remember how excited those East Germans were to cross the border into Austria in 1989? The difference is far less stark now, although there are still differences. And of course, I noticed them!

Personally, I love Prague’s frayed edges. After spending most of my adult life in the developing world, I simply don’t feel at home in the modern world. So don’t get me wrong, I like living in Prague! But there’s no doubt that the Austrians took far better care of their country in the years since World War Two than the Communists did of the Czech Republic. While buildings are steadily being renovated and roads repaired in the CR, this was accomplished thirty years ago in Austria.

Because of that artificial division that existed for so long between the Czech Republic and its former master, the Austro-Hungarian Empire, the people look different as well. Czechs are tall, fair, and nearly ethnically homogenous, while Austrians are on balance more diverse in appearance, coming in all shapes and sizes. I saw plenty of Asian and Mediterranean-looking people who clearly lived in Vienna, as well as lots of tourists from Muslim countries. I had a momentary flash of that feeling that I got in Munich: that I was breathing the air of a modern, mixed-up city at last.

I thought I had seen Hapsburg luxury in Prague, but in fact, Prague was a mere provincial capital for this extensive and inbred dynasty. It is in Vienna that Hapsburg excess reached its zenith. They did nothing small: huge buildings line the wide streets of the Ringstrasse, with enormous statues clinging to their edges. Columns and fountains that look like they have been constructed from marshmallow fluff dominate nearly every square. Churches have huge domes and extravagant, spiky gold altarpieces. However, I think that the Czech architects had better taste. Enough with the cherubs and eagles, already! 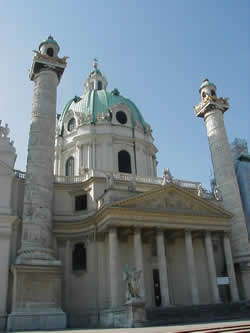 We made the obligatory tour of the Schönbrunn Palace, Maria Teresa’s monstrous home on the outskirts of the capital. Here, she sat, attended like a queen bee, producing children at the rate of about one a year while ruling the Austro-Hungarian empire from her ornately furnished hive. The tour includes lots of information about her eleven daughters–who were all sold off as soon as possible to the most politically advantageous nobleman available–and her descendants, who basically got nuttier and nuttier until the dynasty was finally finished off by an anarchist in Sarajevo, setting off World War One.

Among the last ruling members of the imperial family were Franz Ferdinand, who, when forbidden to bring his gun into Yellowstone, insisted on having squirrels brought to him so he could beat them to death with a stick, and Elizabeth (“Sisi”) who is now a bit of a heroine despite her lifelong descent into narcissism and weirdness, which culminated in routinely being tied to masts during storms at sea. Chocolates are sold in Vienna bearing her name, which is pretty ironic considering she was anorexic. She was assassinated by another anarchist, I think, who didn’t particularly care which Hapsburg he killed as long as got one of them. This makes some sense, since they were pretty much genetically identical by that point, like so many ears of Iowa corn.

I was sitting with my husband in a sidewalk cafe and flipping through some of our tourist information when the thought occurred to me: what a silly system of government monarchy was. Look at the blithering, inbred, spoiled brats that ended up ruling countries, based merely on their parentage (Yes, I know we have Dubya, but we can get rid of him in just four years without resorting to anarchy and assassination, that’s my point!) If there was one idea that sunk in during my three days in Vienna, it was that rule by bloodline alone had clearly run its course by the turn of the 20th century.

But I digress! Speaking of Hapsburgs, our final sightseeing trip on the morning before we left was to the Kaisergruft, a rather plain church in the middle of town with only one notable feature: there are 160-odd Hapsburgs buried in the crypt underneath the church. We had to see it.

Strangely enough, the crypt is quite plain. Parts of it could literally be mistaken for a wine cellar or waterworks. The bronze coffins are lined up in rows–some with nameplates, some without. Some are ornately decorated, while others are very simple. Maria Teresa’s is, of course, the best of the bunch. Twenty feet tall, with statues of MT and her husband, Karl-something, sitting up and bed, facing each other. (Rather appropriate, since they must have spent quite a bit of time there to produce 17 children.) Their enormous coffin is surrounded by those of her children, in varying sizes since a few of them died in childhood.(Those little coffins always get to me…)

Near MT, but at a discreet distance, lies her governess, the only non-Hapsburg to be buried in the crypt. One can only guess how MT must have depended on this woman, and it lends the empress a bit of femininity that I find appealing. Would an emperor have honored his childrens’ caregiver in this way? Doubtful!

Lastly, we ate and drank. And ate and drank some more. I have never eaten so much cake in a three-day period in my life. It was fresh, accompanied by plenty of whipped cream and hot coffee, and served with great grace despite the fact that Vienna appears to be even more overwhelmed with tourists than Prague. We even stopped by the famous Hotel Sacher for Sacher Torte. (Note: It was OK, but overpriced and there are plenty of nicer sidewalk cafes to enjoy in Vienna.)

As we crossed the border back into the Czech Republic I felt as if I were coming home–sort of. That’s about the best you can hope for as an expatriate. On the other hand–we just up and went to Vienna for the weekend! I love the fact that I can actually do that now.

My five-year-old son called us three times on my husband’s mobile phone during our vacation, once to ask if we were on the other side of the world (: When we returned, we found that the kids had been waiting out front of the house for an hour, asking everyone if they had seen a taxi coming our way. They had a wonderful time with the babysitter (who looked a bit frazzled) and we were all glad to see each other. It was a very well-timed break in the middle of a generally cold, rainy, Czech summer!