This blog has slowed down a lot lately. That may be a good thing!

I started blogging almost ten years ago, just as we were gearing up to move back overseas after seven years in the States. I was plenty busy at the time, with two kids, a home business, and a major international move on the horizon. I certainly didn’t need another project! I wrote because I needed to write about all the craziness (which only got worse, as it turned out).  I wrote as therapy.

Since then, WTWD has swung wildly between travelogues, expatriate musings, and commentary on the Foreign Service. Occasionally, I just can’t help myself from blogging on American politics.

Well, I’m not traveling much now, and don’t plan to in the future. I have some retired relatives who do one really nice, adventurous vacation per year: that sounds about right to me. Don’t get me wrong, I love a good day trip, or a weekend in the mountains. But I also increasingly love my own house, my own bed, and not being completely exhausted at the end of the day. I especially love not feeling like I have to get out of town to stay sane.

We’re out of the Foreign Service bubble now. That doesn’t mean we’re out of the wider community, of course. Most of my friends are, or have been, expatriates of some kind. When you live overseas for a decade or two, you will never be completely “normal” again. It’s only natural to want to hang out with those who have traveled the same long road.

That said, I think the best people to solve problems—or to rant about them online—are the people who are actually experiencing them. Our role now should be limited to offering support and encouragement. In my humble opinion as a very newly minted retiree spouse!

Politics…OMG. There is so much to say, and so many people saying it. I don’t think the world needs another political blogger.

I’m sure I won’t be able to resist writing something on occasion, from a personal perspective. But I’m no longer sitting in that dark Warsaw apartment, watching aghast as events unfold back home. I’m not only (thankfully) a whole lot busier in my personal life, but I can actually do something here. Help immigrants learn English. Show up for marches. Volunteer for political campaigns. Be a participant instead of an observer for a change. I’m working on it.

As expatriates, we live much of our lives as observers of cultures that we can’t truly be a part of for language or other reasons. (Not that we always want to be a part of them!) Even expatriates learn a language, marry, and settle into other countries that they grow to love always feel a bit apart. That’s why so many of them seek out other expats to form the bulk of the membership of international groups overseas.

We are also observers of our own cultures. This is true both when we live overseas and remains the case to at least some degree when we return. There are so many things I appreciate more about the U.S. after having lived abroad (a long list that I’ll save for another post). But there are also many things that I have seen done better elsewhere, from public transportation to gun regulation.

These days I often look at my own country a bit askance, thinking, WTF?

America is a good place. A very good place. But if we really wanted to be “great,” we wouldn’t be bragging about it all the time on little red hats. We’d be watching, listening and learning from other countries how we could be even better.

2017 was a year of huge changes. I said a fond farewell to my expatriate life. I know that I’ll miss it from time to time. I’ll always have one toe in the outside world now that I have lived there. My perspective will never be the same.

But it feels good to have the rest of my body and mind back where it belongs.

Happy New Year from the USA! 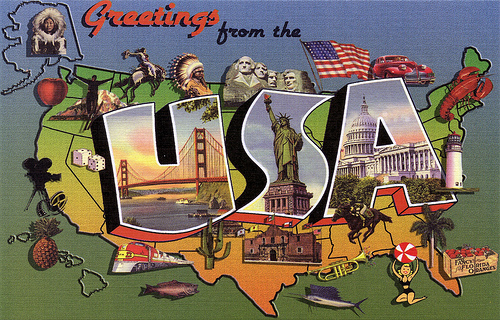