I spent last Wednesday holed in up my apartment eating chocolate peanut butter cups, commiserating with friends online, and trying to breathe. That was a thing I needed to do. However, by Thursday evening, plans were being made. More about that later. I am moving on. We are moving on.

But there’s one hump I just can’t get over.

I’m hearing and reading over and over again that I am supposed to try to “understand” and “empathize” with Trump voters.

I look exactly like a Trump voter. I’m a white, southern woman with blue-collar evangelical Christian roots. I spent plenty of time in rural America growing up. I am married to a white-collar professional. I stayed home with my kids for two decades. I even listen to country music! By most demographic measures, I should be voting party-line Republican in every election. So, you would think that I could understand the logic, just a little.

Some Trump voters cite thinly disguised racist reasons such as “taking America back” or “building a wall.” Racists have always been with us. That they voted for a guy who is basically a white nationalist does not surprise me. I certainly can’t empathize with those people, but at least their votes make sense in an ugly kind of way.

But others claim that they are not racists. They cite reasons ranging from putting pro-life judges on the Supreme Court (assuming he gets a chance to do that, which is not certain), to believing that a businessman who specializes in eviscerating companies and firing people will bring jobs back to dying industrial towns. Right.

There is this vague belief among some voters that Trump has super-special asshole powers that he will use to “shake things up.” That might make sense on an episode of The Apprentice, but it is an incredibly irresponsible reason to vote for a president. I don’t think you have to have a college education to figure that out. I really don’t.

So, here’s the deal. If you subtract all the overt racists, I still can think of no reason for voting for Trump that doesn’t involve being either,

1.) so single-minded about one issue (abortion) that other consequences—say, allowing insurance companies to deny coverage for contraception—don’t matter.  Even if they directly contradict the goal that you are supposedly so passionate about.

2.) a complete sucker. OMG, it makes my head hurt. 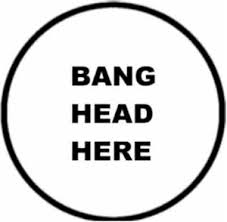 So, as far as I can see, all those reasons fall under “stupid.” Including racism and sexism, because how dumb do you have to be to think you are actually better than someone else because you have white skin and/or a penis?

Oh, and the women who voted for him? Despite his pussy-grabbing hobby? There are no words. WTF.

In the South, we have a saying. You can’t fix stupid. And we ought to know. All this talk about “reaching out” to Trump voters sounds very nice. But I think it’s pointless. They aren’t going to change. And Trump knows this. Mister “I love the poorly educated” aimed his pitch straight at the stupid. And he was right. He won.

I’m not in favor of trying to overturn this election, and I’m not in favor of violent protests. We are stuck with this guy for the next four years—unless he just gets bored and walks away. It’s time to move on: to work to minimize the damage and make sure this never happens again. In order to do that, we might have to forgive some of the stupid.

Because you can’t fix stupid.