I know, I can’t believe it either. 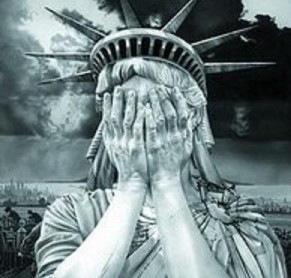 Except, I can. I didn’t think Bush would win a second term in 2004, but sure enough, my crazy country disappointed me. And it’s gone and done it again. Great job, folks.

I try so hard to be patriotic. Some days, it’s harder than others.

However, while I’m not sorry to have a little breathing space before going back to the States, you won’t hear me threatening to emigrate. You see, I’ve lived in lots of other countries, and I know one thing for sure. There are crazy, stupid, racist people in every single one of them. It’s only a question of ratios. But you can’t get away from them altogether, no matter how hard you try.

I did one very small thing that made me feel better today. Inspired by a post on Pantsuit Nation, I donated to Planned Parenthood in honor of Hillary Clinton. It’s the only way I could think of to say thank you to her—and to make a statement.

That statement is: I’m still here. This is what I believe. And I will give my money and time to the causes that I believe in.

So, that’s my suggestion for a very small thing that we can all do today. On a day when we are just too devastated to do anything else. Google a progressive organization that you care about and donate to it today. Because these organizations, and the people they serve and protect, are going to need us more than ever over the next four years.

And no, I’m not going to see that man be inaugurated. I’m going to stay as far away as I can from him for as long as I can. How that affects our long-term plans is TBD.