When I first married the FSO—back when dinosaurs roamed!—I kept my own last name. I just didn’t see any pressing need to change it. My husband didn’t either, so we left things as they were: a Midura and a Bembry who happened to be married.

Of course, I was constantly introduced as Mrs. Midura. (Who is actually my mother-in-law, but whatever.) This was annoying, but not a serious issue. The real problems started when we went overseas for the first time. 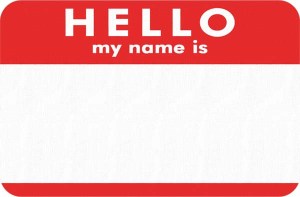 Nowadays, if a person has a different last name than their spouse, no one even blinks. But 25+ years ago, there was little accommodation for it. Especially when it came to official or financial paperwork. All of which quadrupled as soon as we went overseas with the Department of State.

The State Department, to its credit, has been ahead of the curve on domestic partnerships and same-sex marriages in the last decade or so, but back in 1989, those days were yet to come. You had to be married (to a person of the opposite sex) have full status as the partner of an FSO: to get diplomatic immunity, to use embassy services, to be able to apply for embassy jobs, and so on. Many State Department forms only had a space for one last name; e.g. officer and dependent [first name].

So, the assumption was, if you were at post together you must be married. And if you were married, you must have the same last name. We were constantly having to work around this assumption both on paper and in person.

There were other practical issues that cropped up as soon as we went overseas. Cashing checks was a problem. ATMs did not exist where we were posted, so the embassy cashier was the only way for me to get cash.  The State Department Credit Union would not issue checks with my name on them. The options were: “Christopher Midura” or”Christopher and Kelly Midura,” but not “Christopher Midura and Kelly Bembry.” So, our joint checking account checks didn’t have my name on them, and I technically couldn’t cash a check!

I had my own account, of course—at USAA, which we eventually switched all our accounts to because of this very issue—but the embassy cashier would not (and will still not) cash a spouse’s personal check. The employee’s name must be on the check. Now banks will print any two names on a check, and ATMs are everywhere anyway, but this presented a real problem at the time (one of several rude shocks at our first overseas post, believe me).

On our second tour, we had our first child. I thought it seemed like a good plan to have the same name as my kids. My husband wouldn’t change his name, or even consider hyphenating. (“That would be weird, because it’s not my name.” Well, yeah…) That left me. And even then, I might not have changed it, but we were in Central America which, at the time, was roiling with baby trafficking issues, both real and imagined. I knew two women at post with different last names to their husbands who experienced hassles leaving the country with their kids because their passport name didn’t match that of their child.

So, I caved. I changed my name. I became Kelly Bembry Midura. I relegated my own last name to my middle name. And I’ve always regretted that, just a little bit.

No one has ever seemed to be able to remember the “Bembry.” OK, the whole name is a mouthful, I realize. But my name is not Kelly Midura. It just isn’t! Even people who know me well persist in leaving off the Bembry, in personal introductions, in emails, on forms and invitations, and on bylines. Whatever the trick is to getting people to use my full name, I haven’t found it yet.

Midura is a Polish name. It’s a Catholic, Eastern European, Ellis Island, northeastern name. All of which is fine, but none of which I am. Living in the Czech Republic, Austria, and now Poland has confirmed that I just don’t have any real cultural connection to this part of the world. Which is fine: we don’t travel to feel at home, after all. But we don’t go around adopting completely random surnames, either. Married or not, “Midura” still feels totally arbitrary to me.

(Side note: in Slavic countries, all female given names end with “a.” Which means over the last three tours, in countries with this tradition, I have frequently been referred to as “Midura Kelly” ARGH.)

Bembry is a weird name, I know.  Everyone who has it is some how connected to the first Bembry in America. I’ve done some research on this. There are both white Bembrys and black Bembrys, but we all go back one way or another to that first guy (probably a “Bemberry” from the west country of England) who showed up in Virginia or North Carolina around 300 years ago. This is an absolutely typical white southern Protestant name and history—but that happens to be what I am. So, along with my first name, which is my mother’s maiden name, it all fits. It’s comfortable for me.

Fast-forward 25 years or so. My kids are adults. We are on our last overseas tour. I just turned 50—which stuns me a bit, but it does seem like a good time to make changes. And I have decided: I no longer need or want this name.

“Kelly Bembry Midura” is my State Department name. It’s the name I adopted to go along and get along. It’s the name on my diplomatic passport, and my Polish ID card which might as well be “and spouse.” It’s the name that goes with those engraved invitations that say “Mr. and Mrs. Christopher Midura,” or on a good day, “Mr. Christopher Midura and Kelly Midura.” Because no embassy office, ever, in 25 years, has ever remembered to use my whole name.

I’ve already started changing my name in all the unofficial places: email, social media, this blog. I’ve looked up how to complete the process once we get back to the States (Virginia). You just file a request to the court to change it on official documents, attesting that you aren’t trying to commit identity theft. Since I’m going back to my birth certificate name, this shouldn’t be a problem.

I am going to tweak it just a bit. I’m not sure I can take the Suzanne that my parents bestowed upon me as a middle name. I’m taking that down a notch, to Sue. Yes, that makes me Kelly Sue Bembry. It’s a little girly and a lot southern, I know.

However, Kelly is actually a unisex name. It supposedly means “warrior.” And, if you Google “Kelly Sue” you get Kelly Sue DeConnick, born 1970, creator of the manga series’ “Pretty Deadly” and “Bitch Planet.” So, I’m choosing to believe that this is a name in transition. Maybe it’s time for all of us multitudinous Kellys from the 60s and 70s to own the name. Make it our bitch, as it were.

I’ll try and help that along just a little. As Kelly Sue Bembry.