The Amazing Mosaics of Ravenna

Ravenna is just about an hour from Bologna. Located near the Adriatic beaches, it is a small, sleepy city with a glorious history. It was the capital of the Western Roman Empire in the 5th century. Later, it became a major city in the Byzantine Empire, and after that, the seat of the Kingdom of the Lombards.

So! That’s quite a bit of history, right there. All those kingdoms left a wealth of architecture and art in their wake: Ravenna contains eight UNESCO World Heritage sites dating from Roman and Byzantine times.

I remembered some of this from art history classes, but I was still unprepared for the sheer quantity of eye-popping mosaics that we saw during our 48 hours in Ravenna. After all, the locals have been producing them for over 2,000 years, from Roman times until the present. There are several mosaic workshops in operation today.

Here is a small sample of the beauties on offer, starting with the 5th century Basilica di Sant’Apollinare Nuovo. Originally an Arian Christian church under the Ostragothic King Theodoric, it was reconsecrated as a Catholic church by the Byzantine Emperor Justinian I.

So, that was something. Next up, the 4th or 5th century Neonian Baptistery, the oldest monument in Ravenna.

The nearby Basilica di San Francesco is fairly plain by comparison, but does have this very 5th century crypt underneath it. The whole church has sunk until the crypt is well below the water table. Now goldfish swim in it!

Time for a walk through the modern streets of Ravenna (there may be have been a gelato stop along the way, I’m not telling.) 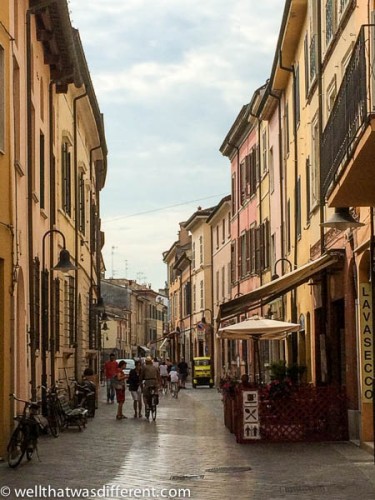 Next up, the Basilica di San Vitale, again a UNESCO site, and again, dating from the 5th century. More mosaics! Including two famous portraits of the Emperor Justinian and his wife the powerful Empress Theodora. I definitely remember those from art history classes.

The next morning, before leaving town, we stopped at the Museo d’Arte della Città di Ravenna. This was one of those odd little museums that most tourists skip over. In fact, the staff seemed a bit surprised to see us. But there were some really nice examples of modern mosaic art to see in it; some professional, others created by local art students.

Ravenna pretty much blew my mind. So much to take in, in such a short time! I’d like to go back one day to give it another look, maybe with a guide who could tell me more about the amazing art and architecture.