Warsaw is treating us well so far. OK, so we arrived just in time for possibly the hottest day ever recorded here (99 degrees Fahrenheit) but we have air conditioning, and the public transit is air conditioned too, so it’s not too bad. Warsaw seems better-prepared for hot weather than Vienna is, despite being much further north. And there is ice cream or cold beer available on pretty much every street in the city, so there you go. Crisis averted.

Both my kids are visiting now, which is great. I don’t think the four of us have been in the same place for at least a year. My son arrived from Vienna right before the HHE did, and was a great help unpacking it. My daughter arrived from Istanbul a few days later, and is taking me to Ikea tomorrow to buy a few things, just like I did for her in Palo Alto a year ago. You might be a Foreign Service family if quality time consists of helping each other move…

There are so many things to photograph here, and so many potential topics to blog about I don’t even know where to start. So, for now, here are some fun postcards I picked up in an antique store in Old Town. They all date from the socialist era, and I figure they must have been taken by a government photographer because they are 1.) pretty bad, and 2.) include a lot of parking lots, roads, and vehicles.

The royal palace with…lot of cars?

Always best to take shots of people walking away from the camera.

The bored kids at top left crack me up.  The shot at top right features, you guessed it, a car. 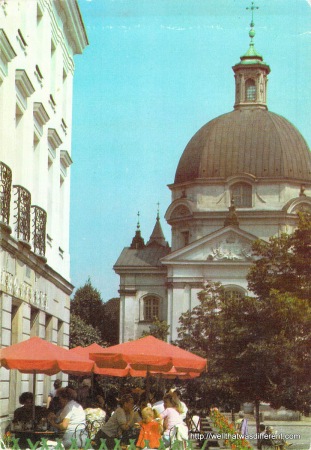 Café in New Town (right next to Old Town.) This 17th century church was flattened by the Nazis and painstakingly reconstructed later by the Poles during the socialist era.

The royal palace has a throne. In case you didn’t know.

Scenes from Lazienski park, near our new apartment. It was nice then, and it’s even nicer now. More about this awesome park in a later blog post!

A restored 16th century cathedral in Old Town. With buses. 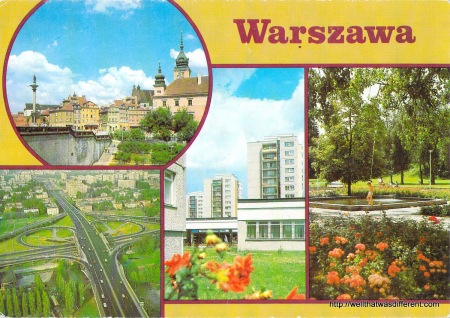 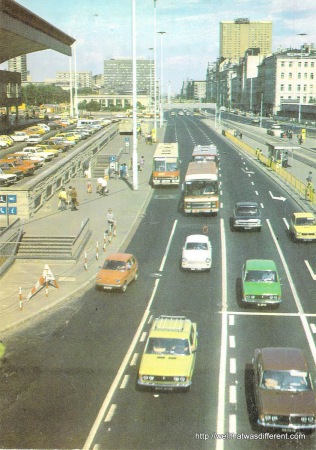 My absolute favorite: a postcard of Warsaw traffic. Or maybe the point is to show Polish-made cars. Who knows?