I’m not the diplomat in the family. Not by a long shot! But, I am aware that I still unofficially represent the U.S. just by my physical presence in foreign countries.

Sometimes, this can be difficult. Take, for example, the entire Bush presidency. We were in Prague when Dubya invaded Iraq on false pretenses, and were still there when the American people re-elected him in 2004. This was downright embarrassing.

It can be even more difficult as a Southerner. I was born and bred in Nashville. I listen to country and blues, have a thing for beans, greens and cornbread, and still have my Tennessee accent, though it’s been smoothed out over the years. Unlike some who leave the South and immediately disavow anything to do with the place, I consider my home town and state to be an essential part of my identity.

That identity comes with baggage. I’ve done a lot of research into my family’s history. Some of my ancestors owned slaves, especially in the Deep South, and most of them fought for the Confederacy. Others were forcibly conscripted into the Confederate army or crossed into Kentucky and fought for the Union. Tennessee history was complicated that way—as is most history when you really look into it.

I am neither proud of my “Southern heritage” nor ashamed of it. It just is what it is. I am white and Southern. History happened.

Outside of its proper historical context (museums, movies, reenactments, etc.) and personal collections of Civil War artifacts (key term: artifacts) that flag represents racism, pure and simple. It doesn’t matter what you think you are saying when you slap it on your bumper. What you are saying is that you are a bigot—and most likely an poorly-educated one.

And then you get horrible events like the Charleston church mass murder. Some dumb cracker latches on to his “white heritage” because it’s all he’s got, and thinks it is his job to shoot black people to start a race war. Yes, there are bigots everywhere, but this one happened to be Southern, a white supremacist who loved taking selfies with his little flags, and he lived in a state with typically Southern lax gun laws and enforcement. No, not a coincidence. Sigh.

150 years after the Civil War, it’s astounding that some people are still waving that flag around. In parts of the South, it is still socially acceptable to do so. As a Southerner, and an American, I am so happy to see it start coming down, at least from public institutions. It’s a small gesture that can’t bring back the victims of the “Mother Emanuel” shooting (and it certainly won’t end racism) but at least we can work towards ending the wordless acceptance of this symbol of white supremacy. Take it down. 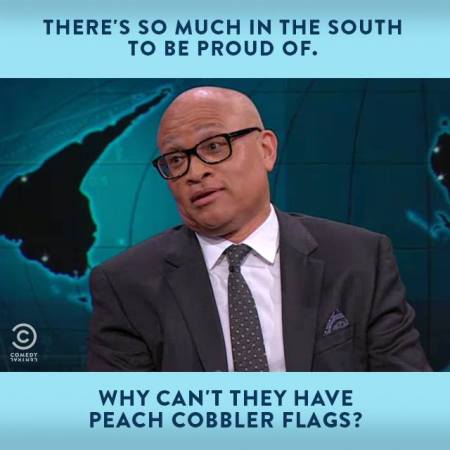