Foreign Service Institute language training is strict. No time off, not ever. Except when Veteran’s Day falls on a Tuesday, and the teachers want a long weekend, so everyone skedaddles while they can.

We were looking for a short drive and a two-night trip, so we headed down to Lynchburg, Virginia. Our primary objective was visiting Appomattox Courthouse. But we enjoyed Lynchburg as well.

Lynchburg is called the Pittsburgh of the South, and for good reason. It was once one of the wealthiest cities per capita in the country and an industrial and shipping powerhouse. Now, large, shabby Victorian houses overlook the James River, and the downtown area is pure steampunk, with abandoned warehouses in various states of either renovation or decay on the banks. Clearly, the reclaiming of downtown Lynchburg is a work in progress. But that makes it more interesting.

We stayed in the Craddock-Terry Hotel, a former shoe factory about 50 yards from a railroad crossing. Oops. But the whistles and horns all night were kind of atmospheric, I must say, and room was big and comfy. A most excellent brew pub and pizzeria in the basement added to the charm. I have never seen so many people drinking iced tea in a brew pub, but Lynchburg is the home of Jerry Falwell’s Liberty University, so there you go. No dancing either, I expect.

I was especially fascinated with all the old signs painted on the buildings. I’m from another Southern river town, and I can remember when these signs were still visible on a lot of buildings in downtown Nashville. 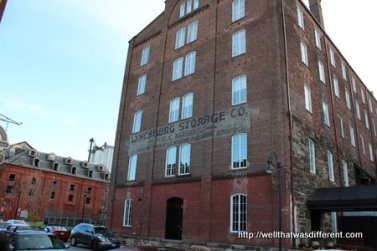 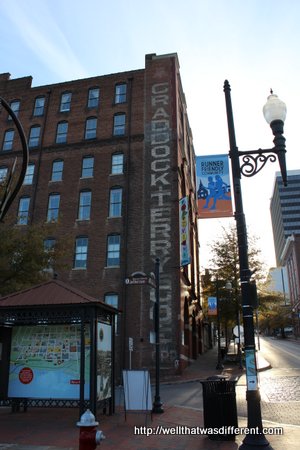 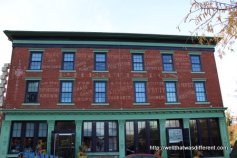 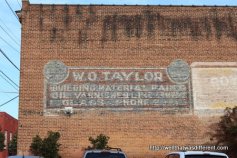 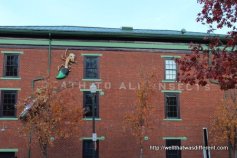 We also enjoyed a walk across an old railroad bridge to Percival’s Island in the James, now a nature preserve with bits and pieces of the old train yard that once occupied the island peeking out between the leaves. Lots of other people were walking or biking with us. It’s clearly a winner in the downtown revitalization category.

The best part of Lynchburg, though, was the Old City Cemetery. I even saw a ghost! More on that tomorrow.