Playing Hooky in Neusiedl am See

Last Wednesday, the weather was beautiful and we were tired of working/sorting crap. So, I talked my husband into taking a day off, and we hopped a train to Neusidl am See, a resort town about an hour southeast of Vienna.

The Neusidlersee—not actually a “sea” but a very large lake—is in Burgenland. There seems to be an invisible line between Vienna and Burgenland at which point the weather becomes more Mediterranean. The landscape is much drier and warmer than in Vienna. For that reason, the region is known for good wine and food as well as recreational activities.

We didn’t really have a plan for the day, we just wanted to get the heck out of Dodge. So, we looked up a few things on my phone on the train, and upon arrival headed to the Kalvarienberg. Because, when there is a hill, we must climb it. Apparently.

Reproductions of Calvary Hill are found in most Catholic countries. They consist of a path with 14 (usually) shrines, called Stations of the Cross, each marking a different event on Jesus’ journey to crucifixion with a painting or sculpture depicting it. Climbing these hills was meant to be both educational to the largely illiterate populace and a sort of mini-pilgrimage.

The Kalvarienberg at Neusidl am See is really not a very big hill, but it was interesting and there was a nice view of the lake from the top. From there, we hiked back down to see a sort of iffy ruin of a small 12th century castle, with wine cellars carved into the hillside lining the route.

Then on to a lunch of yummy venison stew with Eierschwammerl (Chanterelle mushrooms, kind of a thing here) and a somewhat longer than expected hike through wetlands full of birds to the lakeside where we collapsed for a while before (thankfully) finding a bus to take us back to the train station.

Maybe not the most exciting day trip we have ever taken, but it was on my bucket list and well timed. Sometimes, you just have to get away. The next day, I felt much more motivated to sort crap! 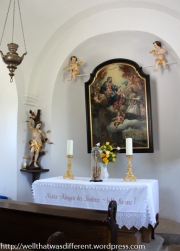 Inside the little chapel at the bottom 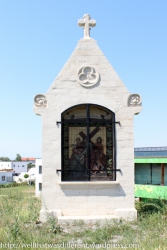 One of the stations of the cross 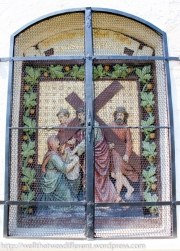 Close-up of the frieze on the station

More statues at the top

This chapel was locked, alas

Poppies and other wildflowers everywhere 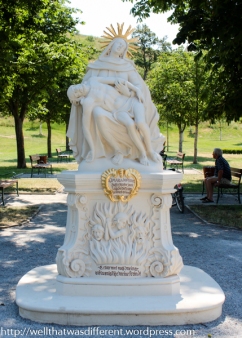 Back at the bottom–a cheery reminder of what awaits you

Wine cellar on the way to the castle 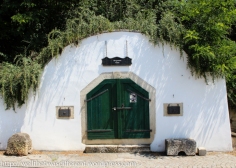 HUGE wind farms in the distance

The way these houses fit together just struck me as interesting

Yarn bomb at the restaurant

The wetlands on the way to the lake 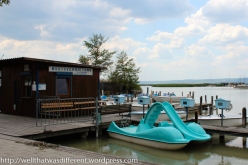 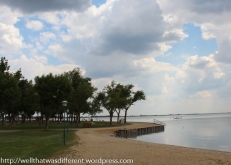 Kids at a sailing camp–they were pretty hilarious

Sailing in circles but having a great time

Big bar on the pier

How to enjoy a lake