On our last day in Krakow, we walked over to Kazimierz, the old Jewish Quarter. We were very glad we did.

Kazimierz was one of the largest Jewish communities in Poland from the early 16th century until Word War II. Originally a village outside the Krakow city limits, it later became a walled settlement, then finally a suburb of Krakow. By the time of the war, most wealthy inhabitants had left Kazimierz for other areas of unusually tolerant and integrated Krakow. The Jews that were left were some of the poorest and most orthodox, which in part accounts for the area being a bit of an 18th century time capsule.

When the Nazis took over Poland, they rounded up all the Jews in Krakow (numbering about 68,000 people at that time) and sent them either out of the city to work camps in rural areas, or to a new Krakow ghetto called Podgórze. A map in the High Synagogue shows the barriers that were erected around Kazimierz in order to funnel all the Jews to a transit point and out of the ghetto. From Podgórze, most were sent on to concentration camps such as Auschwitz, used as slave labor, and murdered.

Kazimierz contains one of the oldest existing synagogues in Europe, the 16th century Old Synagogue. It was looted and used as a magazine by the Nazis, then restored and turned into a museum in the late 1950s. It is a lovely place, and I liked the understated exhibits which focus on Jewish life in the community before WWII, and then let the sheer numbers speak for themselves. There are no photos of concentration camp inmates: instead there are photos of the pre-war Quarter and of Jewish school children in the 1930s–few of which would have seen adulthood.

There is just one remaining active synagogue in the area: the 16th century Remuh Synagogue, looted and used as a fire station by the Nazis, now restored as an Orthodox Jewish place of worship. In order to enter, women must cover shoulders and legs, and men must wear yarmulkes. It is a little jewel of a building with a Renaissance feel, so unlike the Baroque churches we see all the time in Central Europe.

The Remuh Synagogue is right next to the Old Jewish Cemetery, destroyed by the Nazis and now partially reconstructed. Rabbi Moses Isserles, for whom the synagogue is named (it was built on the site of his house), is buried there, along with many other notable Polish Jews. The courtyard has become a collective memorial to Jews killed in the Holocaust: families who have donated money to rebuild the synagogue have also put plaques on the wall to remember their relatives.

My husband I are both history geeks, and know the facts of the Holocaust. But to visit these places definitely adds a new dimension to the facts. In addition, my husband’s great-grandparents were from the area, and he is not entirely sure whether his ancestors were Catholic, Jewish, or most likely some of each. He certainly had relatively close cousins that were mixed up in the chaos of those times.

We contemplated this over yummy kosher soup at Klezmer Hois, one of several Jewish restaurants in the area. And then drove home through orderly fields of wheat and sunflowers. 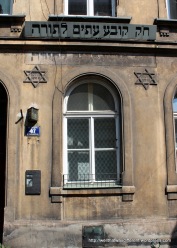 Chedar (prayer house) down the street from the high synagogue

In 1943, 30 Polish prisoners were executed against the synagogue wall by the Nazis 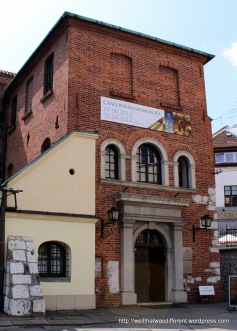 Tithing box in the Old Synagogue

Reconstructed altar in the Old Synagogue 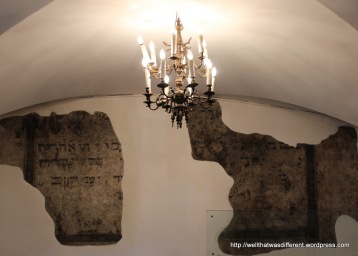 Original inscriptions in the Old Synagogue 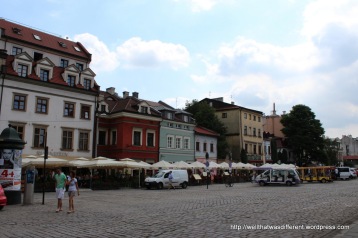 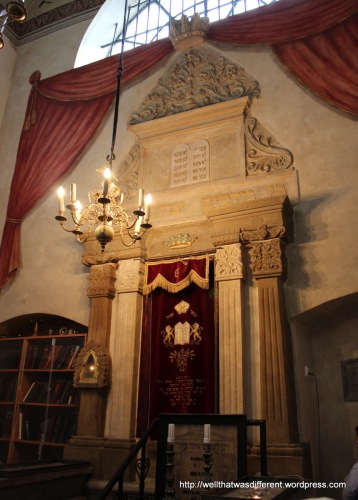