Rome is Amazing: Got Churches?

I thought I was over churches. And then I went to Italy.

In fact, I am pretty much over Central European Baroque churches. A person can only take so many cherubs in one lifetime. But Italian churches are different. Many of them predate the Baroque era, for a start. Some of them have Gothic, Romanesque, or even Byzantine design elements. Amazing works of art can be found in little chapels financed by wealthy Italian merchant families. And every now and then, there is a whole other church lying underneath!

We saw several churches in three days, only one of which we were actually looking for. They included the Chiesa del Gesù, which is, in fact, a Baroque church. One of the very first Baroque churches, and a model for later Jesuit churches all over the world. In fact, we almost didn’t go in. But I’m glad we did, because as a pair of graduates of a Jesuit university, it was kind of fun to see the tomb of old Saint Ignatius of Loyola himself.

On to San Luigi dei Francesi, which we did intend to visit, on a friend’s recommendation. Well worth it for the Contarelli Chapel, with three Caravaggios depicting the life of St. Matthew. Caravaggio was ahead of his time in many ways: his paintings can be identified right away by their dynamic composition and strong contrasts. We saw several of his works on this trip, and I consider that to be an item crossed off my bucket list!

Santa Maria del Popolo, which we stumbled onto after visiting the Borghese Gardens, also boasts two Caravaggios, including one of my favorites, The Conversion on the Way to Damascus. What a thing to run into by accident! Only in Rome.

Santa Maria Sopra Minerva was nice, and included a surprise Michaelangelo, the Cristo Della Minerva. You know, just standing there, nonchalant, looking like he is about to hail a cab.

Finally, the morning of the day we left, we stashed our luggage and went for a walk. Stepped into a fairly ordinary-looking church, San Crisogono di Trastevere, and were invited by some old guy to see the early Christian crypt underneath for 3 Euros each. We descended rickety stairs to a huge underground space with 5th century ruins, frescoes, and tombs lying about. It was a great way to round out our visit!

By the way, if you want to see the photos and captions more clearly, click any photo in the collage below to open a full-screen slideshow.

The Chiesa del Gesu with the Jesuit symbol over the door

Chiesa del Gesu: rather feminist statue from the tomb

Chiesa del Gesu: other side of the tomb

Chiesa del Gesu: another mosaic with the Jesuit seal 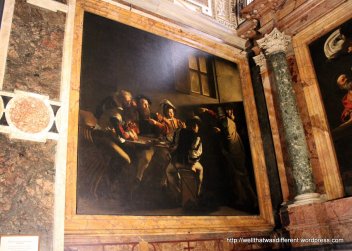 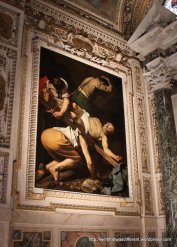 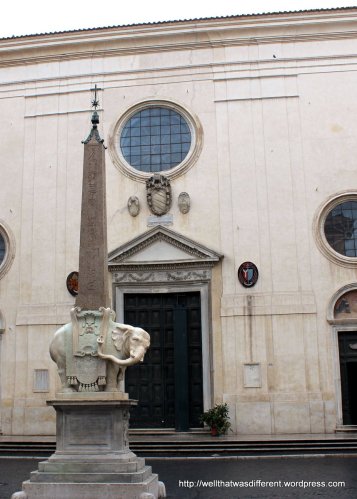 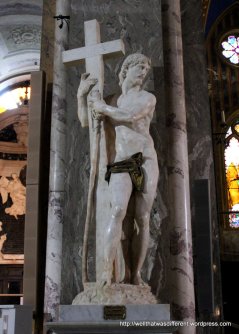 San Crisogono in Trastevere: entry to the crypt 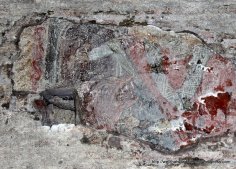 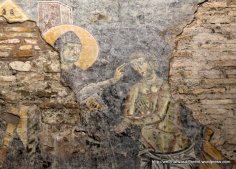 San Crisogono in Trastevere: this saint seems to be looking at us from across the centuries