Your Taxpayer Dollars at Work

Well, I was shocked to find that my blog has still not been included on the State Department’s recruitment page. Even with all the posts about fab Italian vacations, which are, after all, absolutely typical of the Foreign Service lifestyle. I guess I’m still not topical enough, sigh.

So, I decided it was time for a one hundred percent Foreign Service post. About the one thing that we all have in common, no matter where we are in the world. The one constant, from Angola to Austria, from Swaziland to Switzerland, and beyond. The finishing touch that makes all our government housing feel like home.

Recently, GSO sent a guy over to do an inventory on our apartment. The most interesting aspect of which was the valuations assigned to the furniture. They are a hoot. I mean, really, as a person who routinely shops thrift stores and Craig’s List in the States, they crack me up. You could never, not in a million years, get anyone to pay that much for this furniture in the States. Quite honestly, it wouldn’t even occur to me to sell it if it were mine. I’d donate it or freecycle it.

And then consider that the U.S. taxpayer has actually paid a gazillion dollars and burned tons of fossil fuels to ship this stuff from North Carolina to everywhere in the world. Including places where they make very nice furniture. Cheap. Or places like Vienna, with an Ikea selling furniture made nearby in Eastern Europe, and small apartments in which beat-up old American hotel furniture looks even more ridiculous than usual.

So, just for fun, I thought I’d look up what it would cost to replace my furniture versus what it would cost to buy brand new from the local Ikea. All these prices include VAT, which I don’t think the Embassy would have to pay. So, feel free to mentally knock 20 percent off the price given.

Also, keep in mind that all the Drexel prices are replacement cost for the furniture in “used, fair” condition. Lord only knows what it cost new…

Drexel “18th century” sofa in the dreaded blue-and-poop polyester brocade pattern. Does not look like it has ever been re-upholstered, so we are probably the fourth or fifth family to use it. GSO valuation: $1003.83. If I actually bought upholstered furniture in thrift shops (which I rarely do because of a slight ick factor) I might pay $100 for this, tops—and plan on reupholstering it right away.

Brand new Ikea “Ektorp” sofa with washable slipcovers in a variety of colors (how awesome would that be??) €519 or about $636. Heck, toss in an extra slipcover and it would still cost less than the Drexel sofa in used condition. 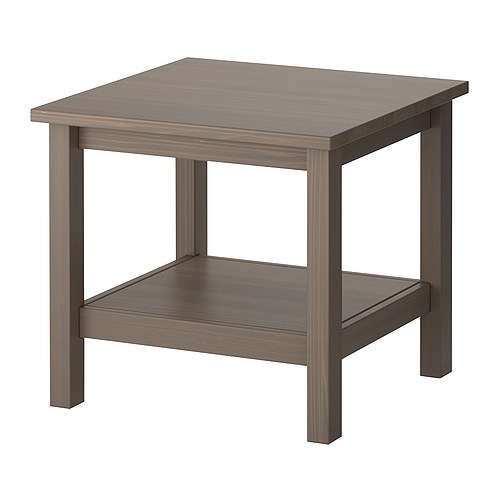 No, that is not an icebox or a safe. It is the standard kids’ room dresser. It is a Drexel “Windjammer II” (some kind of sailing motif from the 1970s?) chest of drawers. GSO valuation $384.64.

At least this stuff is solid oak and more durable than the cherry veneer furniture like the Aunt Mabel table, above. But imagine what it must cost to ship.

I decided this was the best way to show what the rest of the furniture looks like. It is dark. Very dark. Pine or maple with a fake cherry veneer that scratches way too easily.

And lots of brass. Just think about the last Marriott you stayed in and remember the furniture in the room. That would be the look, more or less.

There may be some people in the current Foreign Service who love (or even like) this stuff. I haven’t met one yet. I have talked to a few who think it’s just OK, but that’s about as far as it goes.

Of course, not everyone is going to love furniture that is purchased  primarily for utility and and suit the widest variety of tastes. But that truly does not explain how we end up with such incredibly fuddy-duddy stuff. I mean, what is the average age of a Foreign Service officer nowadays? Heck, what was it when this furniture was purchased? Unless it was about 86, I really can’t understand how we got here. Deep into Drexel Hell.

I used Ikea as an example because everyone is familiar with it. And we have one in Vienna, so I occasionally daydream about what my modern apartment would look like if I could set all this Drexel junk on the curb and buy furniture that actually looks like it belongs here. Wouldn’t that be awesome? If the Embassy could buy furniture locally, they couldn’t possibly do worse than Drexel, and even it Austria, it wouldn’t cost as much as shipping it several thousand miles from the U.S.

Of course, you can’t just go out and buy furniture at every post. But could it be ordered from a neighboring country? Or ordered from a company other than Drexel? Would even Pottery Barn really cost more than Drexel, if the furniture was purchased in bulk? 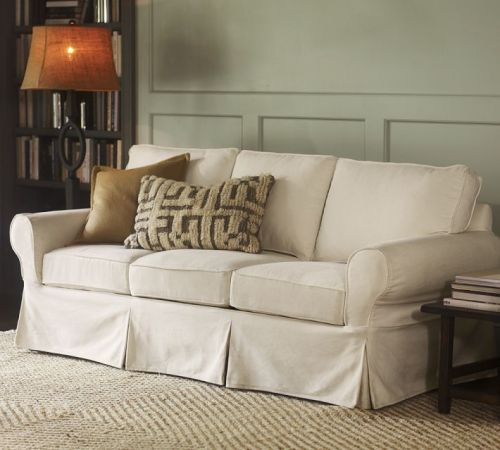 Pottery Barn Basic sofa, $1,299 new. Comes in lots of different fabrics, NONE of which are poopy polyester brocade. And, get this: it’s made in U.S.A.

I rest my case.