Tourist in My Hometown: Clara Barton House and Glen Echo

One of the items on my bucket list, ever since I saw a story in the Washington Post about it a few weeks ago, has been to see the Clara Barton house. Just because it’s there, 20 minutes from home, and in 25 years of living in the area (on and off) I’ve never seen it. Well, this is hidden gem. Arriving for the 10 AM tour on a Sunday, we had the place more or less to ourselves, and got a personalized tour along with one other couple. Unfortunately, my regular camera died when I got there, and I had to use my phone to take pictures instead. So, they are kind of dark and blurry.

Clara Barton was a really interesting lady: along with founding the American Red Cross, she was one of the first female federal employees, working in the Patent Office before the Civil War. She continued to advocate for equal pay and womens’ rights for the rest of her life, though she never personally even got to vote.

She was known for her extreme thriftiness, which led to some pretty creative solutions around her home and in her lifestyle. The rambling house was built in 1891 to Clara’s specifications. Two brothers were establishing a “Chatauqua” or educational village, at Glen Echo, and wanted to attract a famous person to live there. So, they offered to build her a house if she would come live in it. She made some unusual requests. The corridors in the house are lined with big closets behind wood paneling to store relief supplies. And the house is made largely from reclaimed wood, including pieces of President McKinley’s inauguration platform. It was truly a “sustainable” building.

The ceilings, and some of the walls, are finished with plain muslin. This was Clara’s idea to save on plastering. They had the muslin for bandage-making in storage and just tacked it over the ceiling and wall joists, then painted over it. It looks kind of like the inside of a tent. On the exterior walls, they crumpled up newspaper and stuffed it behind the muslin as insulation. Yes, the whole thing is giant firetrap! But the rooms are charming.

The house served as the headquarters of the Red Cross for several years. Clara’s devoted volunteers received room and board in exchange for their work, and the place operated as sort of commune. The two-acre property was heavily planted in over 30 different crops interspersed with conventional flower gardens. Edible landscaping! They kept cows and chickens, and were largely self-sufficient on an unheard of (at the time) semi-vegetarian diet. All in the suburbs of Washington, DC.

Just across a footbridge from the house is a slightly spooky old amusement park. Glen Echo Park operated from the early 1900s to 1968 at the terminus of a streetcar line coming out of Washington, DC. Now it is a sort of artsy historical kiddie thing with a playground, puppet theater, and art classes in the old buildings. Hordes of little boys were overrunning the place while we had coffee from the snack stand. The art deco architecture is still very much in evidence.

There are these funny little hobbit houses interspersed among the art deco buildings. They are “yurts” leftover from a 1970s architecture exhibit on the Mall. I am not sure how they ended up at Glen Echo, but they are now artists’ studios. 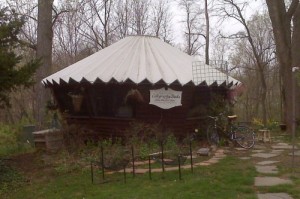 Anyway, this was fun way to spend a gray Sunday morning. Next stop: the Anacostia Museum and the Frederick Douglass House. The clock is ticking on this bucket list!