My son wanted to go to the thrift store today, and who am I to argue? Besides, it was 25 percent off day! So, he scored a really nice leather jacket for about ten bucks, and I acquired some more pretty.

My new thing is buying clothes that I just like because of the fabric. There are unconfirmed rumors that our place in Vienna has five bedrooms. You know what that means: sewing room! I have big plans for staying busy on cold, yucky, European days. Really big plans.

Here are some nice cotton fabrics I got today for a buck or two.From left: a scarf or something that says Made in the Netherlands. Then, a really big dashiki-type thing that is probably from Africa (there are usually some African clothes at the thrift store). A dark green scarf that says Made in Switzerland, which seems slightly bizarre because it is batik. But it’s a nice, thick cotton. And four large napkins from India. I’m thinking they could make some interesting pillow shams one day.

Another thing I really like at the thrift store, but haven’t talked myself into buying, are all these old acrylic afghans in Day-Glo colors and quilts made of polyester double-knit scraps. They are actually pretty awful, but they are just so of a certain time and place for me. No one will ever make afghans and quilts like that again–and thank heaven for it–but at the same time, I kind of hate to see them end up in a landfill. Someone put a lot of effort into them!

I discovered the vintage rack today. Uh-oh. I bought this super-cool sequined jacket for $7. My son said it made me look like a member of Sgt. Pepper’s band, and he would sue for legal emancipation if I bought it, but I just had to have it. Turns out it’s by an 80s designer that was so bad he’s now cool. I could probably sell this for $50 on eBay, but no way, I’m wearing it, with my cowboy boots, the first chance I get… 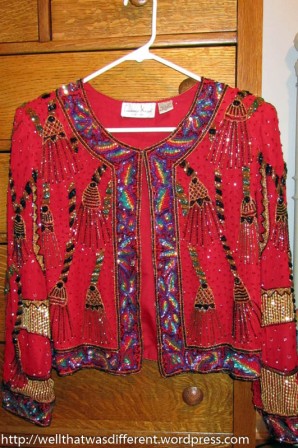